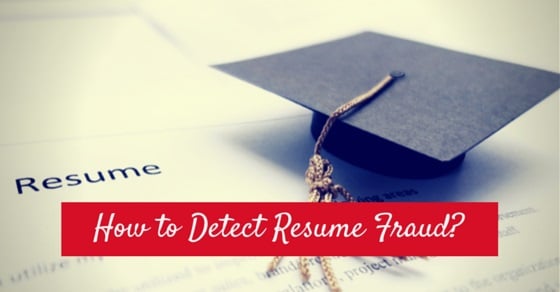 What is Resume Fraud? Are you doing it?

What is resume fraud?

Before the arrival of the present head honcho and Stanford-grad, Marissa Mayer, Yahoo had a CEO named Scott Thompson. His term, which started in January 2012, was so short that you are probably googling to check if this is true. Four months into heading the corporation, Scott faced a peculiar problem: an investor and activist shareholder revealed his gilded resume. Well, who cares what his resume contained? Afterall he was a tech celeb that was already hopping executive chairs in the valley (Before Yahoo, he served as President at PayPal).

Not quite. The padded resume showed an “inadvertent error” in his bio claiming that he had a bachelor’s degree in both accounting and computer science from Stonehill College. Now here’s the bummer: his real degree is in accounting only. To fathom the alarming gravity of the matter, consider this: in addition to references to a computer science degree appearing in his online bio on PayPal’s website when he was President there (frankly, that is a long timeline), the false statement about his degree appeared in Yahoo’s annual report filed to SEC. Thus you should always avoid resume fraud.

He was fired in less than two weeks and it felt like tumbling of a delicately crafted stack of coins when one pulls out a single penny. The takeaway from this strange story is – fabricating a lie or putting misleading information on your resume will come back to haunt you. Regardless of your rung on the corporate ladder, if you ever thought of including a course or certification that you didn’t earn on your resume, let this be your wake-up call.

Discrepancies in the resume, which were largely considered only present in junior to middle-level positions, are progressively being noticed at senior levels as well. Global executive search firms like EMA-partners or India’s background check company AuthBridge have reported several such cases in the recent times and numbers are only scaling up with many of these cases highlighting an obsession of prospects with nation’s elite institution. Thus you should always avoid resume fraud.

HireRight, a leading provider of on-demand employment background checks, released a report conducted from January 2014 to April 2015 tallying the amount of lies and discrepancies at 23 percent with more than half of them relating to education. Correspondingly, AuthBridge also conducted screenings over a year and found out that of the 250 scrutinized leaders, 20 of them had discrepancies ranging from lying about education to hiding tenure gaps as big as 2 years.

A majority of the people screened lied about the duration of their tenure to buff up their work-ex durations. From a few months to a couple of years, employees have lied about it in the interviews and later regretted when the information saw the light of day.

Inflating resumes by fabricating certificates/courses is nothing new in fresh graduates. Sometimes they get away with it but pay the price when asked to perform in high-pressure scenarios and ultimately pay the price with losing their jobs.

Almost every corporation deems it best not to recruit employees who have been to the other side of the fence. Hiding a criminal history is probably the toughest act of duplicity committed and hence it is rarely revealed in background searches. Thus you should always avoid resume fraud.

Crafting a fraudulent identity has also worked well for some in the past but it is one of more serious crimes and punishable by law.

Expertise on a subject, earning a certificate and related licensing required to practice a trade is also one of most lied about things in interviews.

Obvious from the amount of resources a corporation expends on hiring an employee (which goes really high in case of senior-levels), the least it expects is a resume full of deceit. Even if one ignores the resulting difficulty with getting the firm back on track after such an expose, there is no mistake in spotting the elephant in the room i.e. legal issues. Since companies go to great lengths to avoid brushes with law lest it hurt their standing in the economy, they are bound to do their due diligence to ascertain the ethical-quotient, as well as a legal one, of the prospects. Thus you should always avoid resume fraud.

Anyone who ever said lying isn’t illegal was probably busy not reading the corporate law or for that matter any law. As they said in the old times ‘a man’s word is his bond’, so it holds true till date. Lying in a resume or misdirecting in an interview amounts to legal action and companies don’t look kindly to those who do that. Additional risks include the security concerns over the company’s property, intellectual or material.

A bad seed destroys the whole crop. An undeserving person can’t either keep up the pace or simply perform the task because let’s face if he really knew how to do his job, he wouldn’t have had to lie in the first place. Which, in turn, affects the motivation, productivity and output of the entire team or department.

Having a con artist amongst them isn’t really what recruiters are looking for or they would’ve mentioned it in the job description. Years it takes a firm to build its reputation and cautiously construct an image can all be undone by a stupid act of a single employee.

While you may fiercely believe you are not a resume fraud in any capacity, let us explore how this elaborate embellishment of their resumes by executives is indirectly harming you. Marquet International, an independent investigative, litigation support and security-consulting firm has estimated 33 percent of all resumes contain false or embellished information. This widespread resume fraud, obviously, makes hiring managers suspicious of every claim you make on your resume. Not only are they wary, they’re responding by adding background checks, technical assessment and additional interviews to the hiring process. They’d rather eliminate a potential candidate they don’t trust, than make a hiring error.

So finally rounding up, resume fraud is nothing new and if you are not deliberately doing it or not lost in the misguided zeal of landing your dream job by any means possible, here are a few pointers to stop this problem spilling over into your resume. Thus you should always avoid resume fraud.

When I say know your resume, I just don’t mean the highlights or your strengths but every inch of it. Even dates of old employment tenures. A study on HR professionals has found that 64 percent of hiring managers didn’t extend a job offer to a potential employee because their background check showed dates that didn’t match with the ones in resume. This will help you avoid resume fraud.

Cover all your bases by making peace with your previous supervisors over stale issues that don’t even bother each of you now. Get him up to date with your reviews, job-title and achievements so your new manager doesn’t get two versions of the same stories. This will help you avoid resume fraud.

Clear-up any issues like digital dirt that may keep you from getting that dream job. Our social media presence has rooted itself so deep that to imagine erasing every controversial thing you have ever posted would be bordering on self-delusion. This will help you avoid resume fraud.

When it comes to the interview, volunteer to provide proof of your certificates earned, courses taken, transcripts etc.: makes you look enthusiastic plus it alleviates any doubts in hiring manager’s head. This will help you avoid resume fraud.

People who lie in the interviews are the ones who mostly boast about owning a stellar qualification or graduating from an elite college. In contrast, genuine candidates are most of the time shy and keep undermining their strengths.  What you need to remember is to keep projecting your skills with some show of proof answer critical personality questions as honestly as you can. This will help you avoid resume fraud.

Recruiting managers are generally clever enough to tell if you are telling the truth, boasting a little or outrightly lying to them. So dabbling a bit in the gray area is fine as long as you are comfortable and ready to back it up with substance. Anything beyond that is a strict no.

As a thought experiment in parting, I’d like you to think about this– would you hire someone if their past turned out dubious in the background screening?